Kudos facebook for being one of informative sources from the internet via sharing and also a micro-blogging besides twitter and plurk. I’m truly touched by one video from facebook. It’s about Baby Brianna. Who is she? I try to make a research for her thoroughly on internet. This is what i got. 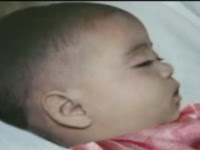 Brianna Lopez was born on Febuary 14th,2002.( Valentines day).Throughout her short life Brianna suffered in ways no child should ever. An autopsy on Brianna revealed she suffered abuse most of her short life. Police arrested Briannas parents, Stephanie Lopez, 19, and Andy Walters, 21, and uncle, Steven Lopez, 19. They each are charged with child abuse resulting in death. Walters also was charged with criminal sexual penetration of the baby.

One night Miranda, Walters and Steven Lopez were drinking beer Thursday night when they began to toss Brianna into the air, hitting her head on the ceiling and at least twice failing to catch her before she hit the floor. Stephanie Lopez said she had about three beers, then fell asleep. The next morning, she told investigators, she found Brianna on the floor and was unable to wake her. Walters said when Stephanie Lopez asked what happened to Brianna, he told her “we played a little rough with her last night.” Walters changed the diaper and took a baby wipe, wrapped it around his index finger and inserted it into brianna’s anus. Steven Lopez admitted to having sex with Brianna Lopez at just 5 months old. Her anus was raptured.

July 19th, 2002 Stephanie Lopez checks on her daughter, notices Brianna is not breathing, and she calls 9-1-1. Brianna Lopez died at Memorial Medical Center in Las Cruces at only 5 months old. The autopsy revealed a long list of injuries that appeared to have been inflicted over an extended period of time upon the little girl. Brianna had 11 human bite marks in varied stages of healing, multiple bruises, fractures to two right ribs, three skull fractures, swelling of the brain and signs of shaken baby syndrome. Brianna also had fractures to both legs, an injury experts say is commonly caused by picking up the child with a quick, jerking motion by the legs.

Walters admitted to biting Brianna, but said he “did not take a chunk out of her.” Walters said his 18-month-old son also bit the baby. He said that Stephanie Lopez also bit and pinched her when she became frustrated with Brianna. Blood was found on Brianna’s father underwear which matched the baby’s DNA. 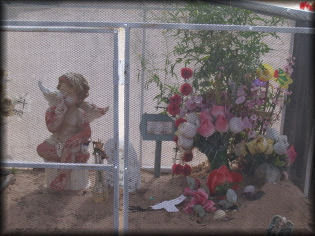 Even though Brianna’s community raised money to help her family build a memorial and for a funeral her family buried her quickly and quietly excluding some of her family. Thereafter, the dirt mound above the grave was raked flat, and the identification marker was removed. The marker was later returned. But when people who had never met Brianna repeatedly visited the grave site to leave flowers and honor the child, the family built a locked, metal enclosure around the grave site. A ceramic, cherubic angel, with its right index finger in front of its lips, tells those who pass by to keep quiet.

Brianna i am so sorry that life was so cruel to you. It is ok now sweet baby. You are in a better place with angels to take care of you. Please know that there are people here on earth who love you. People who care about you sweet baby. I am proud to say i am one of those people. I wish i could have met you just once to give you a hug and tell you how much you are loved. You will always remain in my heart. YOU WILL ALWAYS BE LOVED. Brianna’s life ended before her time. Please protect the children. No child should ever suffer like she did. I swear i won’t let this happen.

The cause to hang to death the murderer is here also the group here. Join now if you have facebook. I’m sure if you have the heart, you may cry watching this;

Let we all pray for her.. and THINK AGAIN on what we going to do to change this…