Interesting topic i read after Liverpool match against Manchester City which Liverpool won the game with 3 against 0. Great start for Reds with Andy Caroll, Luis Suarez and Kenneth Dalglish. Hell yeah!!Can’t wait next season.

Another story, there’s some west Malaysian (most of them kids) started a group with the name “Fuck Sabah” and we suspected the creator was this person:

And his facebook profile is here. While the group, if you wanna check it out, just go search for it on Facebook or i already linked it with the name above..blehh!!

As the proof of their conversations, check here which i print-screen some: 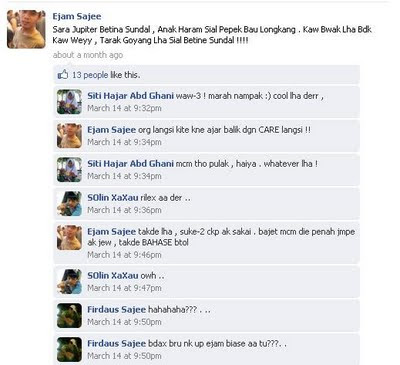 It seems that his being dumped by Sara Jupiter and i don’t know if she’s Sabahan or not. But i found one Sara Jupiter on facebook. Which look like “otaku” to me.. hmmm.. bleehhh… 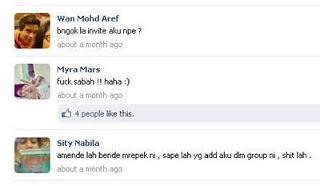 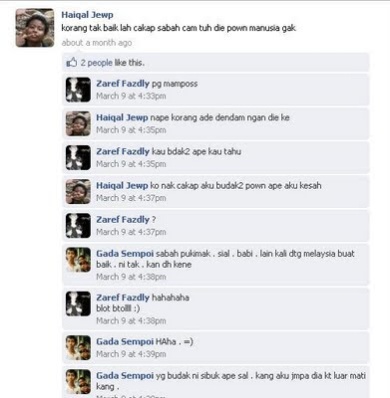 And remember, not everyone of them supporting this group. I refer to West Malaysian friends there. especially the guys above. I can see there’s some murder threat being created by one boy “fake” facebook name Gada Sempoi (still teenager but smoker) bleeehhh….
So, for any Borneo people wanna mad at them, don’t use bad words or whatever. All we have to do, go report to the nearest police station. Don’t become to racial prejudice group which using word “pilak” to insult other races. If you say you hate this, why don’t show your hatred towards this 2 pages, only brainless malformed retard don’t want to have this 2 pages:

1-Anti-Pilak
2-Kami Sangat Anti Pilak dan PTI
if you think you’re honest against PTI, go work in a plantations, to be a cooly in the construction site under the heat of the sun. Practice what you preach. This is same like Nazi and if you want to know more about the definition and term of pilak, go here. http://talkoutmamind.blogspot.com
If you hate Fuck Sabah and claimed yourself not racist, why don’t you go against the 2 pages too? Unless you’re naturan born racist being inducted by your family or forefather. (I realize something about the pages, most of them racist and coward). Only people without iman in their heart will hate others.